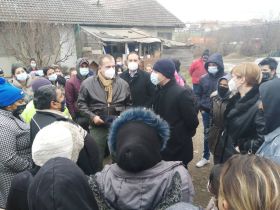 Mr. Zoran Pašalić, the Protector of Citizens, in the capacity of a mediator, talked to the residents of the informal settlement "Viaduct" in Resnik about the conditions for resolving the issue of their housing and resettlement from that location.

“Within the possibility provided by the Law to act as a mediator, we assumed the role of mediators in resolving the problem of taking care of the inhabitants of this settlement in order to fully realize their guaranteed human rights in September, in the investigation instigated upon the complaint of the citizens from the 'Viaduct' settlement, “ Mr. Pašalić said after paying visit to the settlement on Tuesday afternoon, accompanied by the Deputy Protector of Citizens, Jelena Stojanović.

Together with Mr. Pašalić and Ms. Stojanović, representatives of the Ministry of Construction, Transportation and Infrastructure, the City of Belgrade and the company "Corridors of Serbia" talked as well with the residents of the "Viaduct" informal settlement.

“In our constant communication, the residents of the settlement conveyed to me their proposals and conditions for resolving the issue of their resettlement, which I then presented to the competent state authorities” said Mr. Pašalić and added that he had contacted the competent ministry, as well as city and local authorities, as part of mediation on this issue.

“I expect that the competent state authorities, primarily the line ministry, will do their share of work within the agreed deadline and in the manner in which the guaranteed human rights of the residents of 'Viaduct' settlement will be realized. We will perform the mediating role completely until the end of the resettlement of all the residents of this settlement, and at the same time monitor the work of all competent bodies in respecting guaranteed human rights ", Mr. Pašalić highlighted.