Following the Protector of Citizens’ Recommendation, the Ministry of Interior issued an order to all organizational units to change the existing manner of handling citizens’ submissions, meaning that the decisions on citizens’ requests need to be made as administrative acts i.e. to include the rationale and the instruction on legal remedy.

Upon completing the procedure of controlling the work of the Ministry of Interior in August 2020, the Protector of Citizens issued a Recommendation to the Ministry to qualify future citizens' submissions according to the content, to apply measures and activities within its competence and to decide in legally specified form, bearing in mind that in handling citizens’ requests in the past, it did not decide in the form of an administrative act.

The Ministry of Interior informed the Protector of Citizens that it had sent a recommendation on changing the manner of work to Ministry’s organizational units, which within their competencies applied the Law on General Administrative Procedure, for consistent implementation in the future.

In order to promote and affirm child rights in our country within the event "Children's Week” scheduled this year from 5 to 11 October in altered circumstances due to the epidemiological concerns, the Protector of Citizens made a video featuring celebrities who addressed the children from Serbia and extended their support.

Famous basketball player Milica Dabović, actor Miloš Petrović and "YouTube" performer Vuk Vukašinović addressed the children about the protection from bad influences, the need to pursue their dreams and not give up what they love, as well as about all their rights.

The video may be accessed at: https://www.youtube.com/watch?v=OaDGz8chkw4.

Citizens' appeals to the inspection bodies in the city of Belgrade regarding smoke, steam and odors coming from catering facilities, especially those operating within residential buildings, indicate not only the frequency of such situations, but also the need for more precise legal regulations, as further requirements for performing such activities are not specified.

Therefore, in the Opinion issued to the City of Belgrade, the Protector of Citizens indicates to the necessity to regulate additionally the requirements for equipping catering facilities, relevant to smoke, steam and odor exhaustion, taking into account, above all, the efficient environmental protection against these harmful influences, in accordance with the powers delegated to local self-government units by the Law on Hospitality.

Accessibility of the environment, services and information is a prerequisite for establishing social contacts, independence and inclusion of persons with disabilities in everyday life. At the online panel, Secretary General of the Protector of Citizens’ Secretariat, Ms. Olja Jovičić added that the existence of different types of barriers in the environment, however, prevented a large number of public space beneficiaries from exercising those rights.

The Accessibility Award was set up as an expression of a need to achieve a more inclusive society in Serbia, to point out the breakthroughs of individuals or institutions in creating good practice examples, which contribute to improving the quality of life of all persons and to promote such examples of good practice in order to achieve their broad application. We strive for a society where each and every person will be enabled to live independently and participate in every walk of life on an equal footing as all the others and accessibility is a prerequisite for everybody’s full participation in the society, Ms. Jovičić has pointed out.

In addition to Secretary General Ms. Olja Jovičić, the panelists were the representatives of the US Agency for International Development, Team for Social Inclusion and Poverty Reduction of the Government of the Republic of Serbia, the Serbian Philanthropic Forum, Eurobank, as well as the representatives of city municipalities and institutions from Serbia. 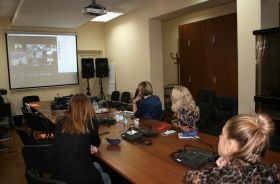 The return to school desks, regular classes and meeting peers during the breaks are principal wishes of elementary and secondary school students all over Serbia expressed by the Institution’s Youth Advisory Panel members in a discussion with Ms. Jelena Stojanović, the Deputy Protector of Citizens for Child Rights.

“We wish to attend school daily and have regular classes. Those of us who enrolled in high schools this year have not yet met the other half of the class. If cafes and clubs are allowed to work, then we may attend school normally as well", states one of the participants in a meeting held via Zoom due to the current epidemiological concerns.

Most of the participants in the meeting confirmed that they missed going to school daily, in-person teaching, as well as the opportunity to immediately ask the teachers anything they were interested in. They also complained about the online classes’ organization, particularly the fact that in some schools, students from one group sent to friends from another group what had been taught at school that day, so the omissions occurred.

Another disadvantage is the fact that they have to prepare on their own for tests in different subjects scheduled in the same week.

Youth Advisory Panel representatives told the Protector of Citizens’ expert associates that due to the organization of classes via the Internet, they had little spare time for socializing and free activities. In their words, they mostly miss socializing at school.