Acting on the Protector of Citizens’ recommendation on emergency employment of professional employees in social welfare centers throughout Serbia, the Ministry of Labor, Employment, Veteran and Social Policy obtained the consent of the Government of Serbia to employ a total of 187 new professional workers on an indefinite-term basis, 108 of whom will be employed in social welfare centers.

The remaining 79 professional employees, according to the conclusion of the Government Commission for giving consent for new employment and additional employment with public funds beneficiaries dated 28 October 2020 will be employed in social welfare institutions, reads the notification of measures taken by the competent ministry on the Protector of Citizens’ recommendation.

In his earlier recommendations, including the collective recommendations from 2016 and 2018, the Protector of Citizens pointed out to the competent authorities the problem of lack of professional employees in social welfare centers, and then in early October 2020, he requested the Ministry of Labor, Employment, Veteran and Social Policy and the Ministry of Finance to ensure the full application of professional work standards and adequate acting of the centers as soon as possible.

The notification of the Ministry states that the conclusion of the Government Commission approved the employment of a total of 108 people on a permanent basis, namely 107 people with a university degree in social work and one employee in technical jobs.

In the SWC "Sokobanja", where no social worker was employed, which is why the Protector of Citizens requested the Ministries to provide for an adequate number of professional employees as soon as possible, according to the Ministry, two employees with higher education in social work will be engaged.

The Protector of Citizens was also informed that the conclusion of the Government Commission for giving consent for new employment and additional employment with public funds beneficiaries dated 28 October 2020 gave consent for employing on an indefinite-term basis 15 employees on social work jobs in Belgrade Social Welfare Center. 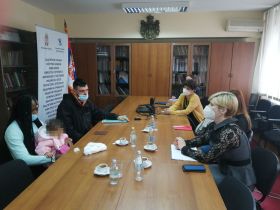 Ms. Jelena Stojanović, Deputy Protector of Citizens for Child Rights and Gender Equality, met today with Mr. Bojan Stanković, a citizen of the Republic of Serbia, whose wife Efrosina, a citizen of Rwanda, was not granted a temporary stay in our country on the grounds of family reunification, while the child born last year has not yet been issued a health card.

During the conversation, Ms. Stojanović told Mr. Stanković that the Protector of Citizens, seven days ago i.e. immediately upon learning from the media about their problem, had launched own-initiative investigation against the Ministry of Interior and Republic Health Insurance Fund.

The Deputy Protector of Citizens also stated that she expected to obtain answers from the competent authorities by the middle of following week.

The Protector of Citizens learned from the media on 10 February 2021 that the citizen of Rwanda had been charged for health service at UCCS Clinic for Gynecology and Obstetrics, even though she was married to a Serbian citizen, and that their child, born mid-last year had not been issued a health card.

For such reasons, but also due to media reports on the reasons why the citizen of Rwanda was not granted a temporary stay in the Republic of Serbia on the grounds of family reunification, the Protector of Citizens has launched investigations against the Ministry of Interior and the RHIF and set a 15 day deadline to be notified of all the circumstances of this case.

The Protector of Citizens determined that Ministry of Interior officers during the July 2020 protests in Belgrade and Novi Sad acted illegally and improperly against certain citizens, that they did not have prominent official IDs and that the Internal Control Sector only in one case established the identity of the persons who acted illegally.

Further to the information obtained from the media and social network videos, the Protector of Citizens initiated eight own initiative investigations to control work regularity and legality of the Ministry of Interior and determined that in all those cases there were omissions regarding the treatment of individual citizens by police officers in the period from 8 to 11 July 2020.

The omissions consist in the unauthorized use of force and the illegal and improper use of coercive means by police officers against individual citizens, thus infringing on their right to inviolability of physical and mental integrity and the right to dignity, and then in the fact that the police officers did not have discernable official IDs, which made it difficult to conduct an investigation and determine their individual responsibility.

The Protector of Citizens also identified as an omission that Internal Control Sector did not immediately upon learning, i.e. without delay, undertake all actions and activities in order to establish the factual situation and obtain evidence, as well as individual responsibilities of police officers who acted illegally and improperly against individual citizens.

In the recommendations, the Protector of Citizens states that it is necessary for the Ministry of Interior to ensure, through continuous training, that all police officers act in compliance with the law when exercising their powers, as well as to ensure that all police officers, when securing public gatherings, maintaining public order and peace and applying police powers to citizens, have discernable official IDs on the grounds of which they can be easily identified.

"The Minister of Interior, Police Director and the Heads of Police Administrations, fulfilling their role in the fight against impunity for torture, will send a strong message that inadequate treatment of citizens is illegal, unprofessional and subject to adequate sanctions. Achieving this goal will be ensured by conducting an effective investigation, determining individual responsibility and sanctioning responsible police officers, “the recommendation reads.

The Protector of Citizens specifies in the recommendation that the Internal Control Sector should take all actions aimed at identifying responsible police officers immediately in the future, as soon as it learns that there has been illegal action to the detriment of citizens' rights. The Protector of Citizens expects that the Ministry of Interior of the Republic of Serbia will inform him within 60 days about acting on this recommendation.

The Protector of Citizens Mr. Zoran Pašalić said that on the International Holocaust Remembrance Day, Serbs had always remembered the common tragic fate of the two nations, which had bonded them even more in the aftermath of World War II in order for evil of such proportions not to happen again.

“Auschwitz-Birkenau camp, as a place of Biblical suffering of a nation, is a consequence of the horrific evil. Such evil, grounded primarily on intolerance of racial, national and any other diversity, led to the horrendous suffering of the Jewish people in World War II, " Mr. Pašalić said observing 27 January, the International Holocaust Remembrance Day.

Mr. Pašalić has stressed that we must not forget that out of hatred, intolerance and bias, the Nazis had murdered more than six million Jews in the Second World War, and that such an atrocity must not happen ever again.
The Protector of Citizens has underlined that it is the obligation of the modern world to remember the horrors of the Holocaust repeatedly in order to enable, at any time and in any place, tolerance and coexistence, as well as uncompromising human rights protection.

In 2005, the United Nations General Assembly designated 27 January as Holocaust Remembrance Day, in memory of the day when the largest Nazi concentration camp - Auschwitz - was liberated in 1945.

The Protector of Citizens has requested the Ministry of Culture and Information to initiate adequate procedures in order to determine whether, by reporting about sexual abuse of two children in the vicinity of Kovin, certain media outlets infringed on the rights and interests of the children, and to take necessary measures within its remit.

In an own-initiative investigation launched due to possible infringement on the rights and interests of the child particularly the right to privacy, by publishing the text and the video of the location and house where the children live, the Protector of Citizens has requested the competent ministry to notify him within 15 days on the undertaken actions.

Finally, within the same investigation, the Protector of Citizens has requested Kovin Social Welfare Center to submit, no later than 15 days, information and relevant documentation on whether the family in question has been on the Center’s records, whether domestic violence has been reported so far and what activities and measures the Center has taken upon learning about the sexual abuse of two children.

After learning from the media that a pupil was injured in a Belgrade elementary school shooting, the Protector of Citizens initiated an own-initiative investigation to control work legality and regularity of the Secretariat for Education and Children’s Welfare of the City of Belgrade and Janko Veselinović Elementary School in Voždovac.

The Protector of Citizens requests the competent City Secretariat to submit within 15 days a report and files on the undertaken activities regarding this incident, as well as on the school work supervision, with special reference to the safety of pupils, teachers and other school staff.

In addition, the Protector of Citizens requested "Janko Veselinović" elementary school to submit within the same deadline a report on the activities undertaken regarding the incident, with special reference to the safety of pupils, teachers and other school employees.

Today, in a several-hour-long meeting, Mr. Zoran Pašalić, the Protector of Citizens, talked with the representatives of the Internet Workers Association exchanging information on the situation of the workers earning income from abroad after the Tax Administration issued forms for them to pay taxes for the previous five years.

After learning that citizens who earn income from abroad from freelancing were called to retroactively report and pay taxes for the previous few years, the Protector of Citizens launched own-initiative investigation to control the Tax Administration of the Ministry of Finance.

Upon learning from the media about suspected numerous shortcomings of the competent authorities regarding the exercise of the rights of the citizen of Rwanda married to a citizen of Serbia, the Protector of Citizens launched own-initiative investigation against the Ministry of Interior and the Republic Health Insurance Fund.

The Protector of Citizens learned from the media that a citizen of Rwanda was charged a service in the Clinic for Gynecology and Obstetrics, Clinical Center of Serbia even though she had been married to a Serbian citizen, as well as that their child, who was born mid last year in the Republic of Serbia, has not yet been issued a health card. The Protector of Citizens will also investigate the media allegations about the reasons why a Rwandan citizen was not granted a temporary stay in the Republic of Serbia on the grounds of family reunification.

The Protector of Citizens will request the MOI to provide information within 15 days on the circumstances of the case, and primarily on whether the Rwandan citizen applied to this ministry with a request for temporary residence in Serbia on the grounds of family reunification and, if so, why temporary residence was not granted to her.

In addition, given that it is necessary for the Rwandan citizen to stay in Serbia as she is married to our citizen and has a child with him, the Protector of Citizens requests MOI to notify him on the activities that can be taken to prevent family separation.

From the RHIF, the Protector of Citizens requests that he be informed on all the circumstances of this case within 15 days, and primarily on whether the Rwandan citizen had health insurance deriving from her husband’s insurance at the time of giving birth last year and whether the hospital acted properly when it charged the foreign national for health care.

The Protector of Citizens also requests the competent Health Fund to inform him about the reasons why a health card has not yet been issued to a child whose father resides in Serbia and holding citizenship, as well as what measures will be taken to issue the card to the child as soon as possible.