On the International Day for the Elimination of Violence against Women, Deputy Protector of Citizens for Gender Equality Jelena Stojanović stated today that this type of violence was still present in our communities and that elderly women, especially those in rural areas, faced numerous problems such as poverty, discrimination and violence, as well as the lack of special services and support services.

At the event devoted to the prevention of violence and discrimination against the elderly women in rural areas in the village of Medveđa near Trstenik, organized by the Association "Snaga prijateljstva - Amity" and the Protector of Citizens of the Republic of Serbia, Stojanović stated that the competent authorities should make additional efforts to provide the elderly with all necessary support services, especially amid pandemic.

The Chair of the Association "Snaga Prijateljstva- Amity", Ms. Nadežda Satarić, said at the gathering that older women and older men in the village were endangered since their social welfare centers, police, courts, and healthcare institutions were located remotely.

"Violence is prohibited by law today. No one, including the elderly, should suffer violence, but report it, because otherwise their health becomes impaired and they dependent on others. Economic violence can easily lead to older women becoming homeless," Satarić said.

The participants agreed that violence against women is everywhere, that there were problems caused by low farmers’ pensions and financial social welfare, that many health care services were even more inaccessible due to the pandemic and that older women in single rural households were especially endangered.

On his own initiative, and after media information that an attack on a member of the LGBTI community was reported to the police eight days ago, the Protector of Citizens initiated a procedure to control the regularity and legality of the work of the Ministry of Interior.

In order to protect the person of different sexual orientation, the Protector of Citizens requested the Ministry of Interior to provide him within 15 days with all information related to this case, including information on measures taken to identify and prosecute the three attackers on the LGBTI person.

The Protector of Citizens learned from the media that on 26 October 2021, three unknown men first made homophobic statements and then physically attacked a member of the LGBTI community.

The Protector of Citizens asked the Republic Geodetic Authority, after determining that it had made mistakes in its work to the detriment of citizens and that it had not acted upon the ruling of the Administrative Court, to decide without delay on the received complaints of citizens and make decisions based on law.

The Protector of Citizens initiated a procedure to control the regularity and legality of the work of the RGA on the basis of numerous complaints from citizens who were dissatisfied due to failure of the RGA to make decisions on appeals against decisions of the real estate cadastre office and failure to act upon the judgment of the Administrative Court.

During the control procedure, the Protector of Citizens determined that the RGA did not undertake all activities in order to make timely decisions on appeals against decisions of the real estate cadastre office, nor did it act within the legal deadline according to the decision of the Administrative Court, all to the detriment of complainants.

The Protector of Citizens again pointed out to the RGA that the arguments for not acting on appeals against decisions of the real estate cadastre office submitted to this institution have no basis in any valid legal provision because the provisions of the law prescribing deadlines cannot be interpreted expansively, as well as that it makes an unjustified difference in the treatment of cases that are handled through the E-counter and those that are not handled in this way, which puts a certain group of citizens at a disadvantage.

Considering that the realization of property rights in a certain number of cases depends on the completion of cases in which an appeal was filed, the Protector of Citizens requested from the RGA to inform him within 60 days about acting on recommendations, to decide on citizens' complaints and to make meritorious decisions.

The Protector of Citizens, Zoran Pasalic, said that journalists in Serbia are still exposed to numerous pressures and various verbal and physical attacks, and announced that he would propose that misdemeanor sanctions be introduced for such acts, which would be executed immediately.

"I will insist on expanding the penal provisions for verbal and physical attacks and pressure on journalists, and I will propose misdemeanor sanctions that will be executed immediately because I noticed that inefficiency in executing punishments is the cause of new attacks, the number of which increased last year", Pasalic said.

On the occasion of the International Day to End Impunity for Crimes Against Journalists, Pasalic stated that he demanded for those responsible for threats and attacks on journalists to be punished more severely, as well as for the cases of physical attacks on journalists and their property that have not yet been settled to be resolved.

"One of the ways to more effectively protect journalists is the formation of a unique platform for the protection of journalists from attacks and pressures, which was initiated by this institution. The platform will point out mistakes in the way of work and omissions that will give the Protector of Citizens the opportunity to initiate changes to current regulations", said Pasalic.

Pasalic stated that the technical development of the platform was completed and that part of the data was entered into it, and once again called on journalists' associations to submit to the Protector of Citizens systematized data on attacks and pressures on journalists so that the platform would be available to the public as soon as possible.

The Protector of Citizens Zoran Pasalic once again appealed to all citizens of the Republic of Serbia to adhere to the prescribed protection measures and to be vaccinated against the Covid-19 virus, and pointed out that this is the best answer to get out of the difficult epidemiological situation in which the whole country finds itself.

"The situation with the epidemic of the Covid-19 virus in the Republic of Serbia is becoming alarming. The number of infected and the number of dead have been very worrying for a long time, and that is why I appeal to the citizens to adhere to epidemiological protection measures and to be vaccinated. In the circumstances in which we now find ourselves, vaccination against the Covid-19 virus is the best answer", said Pašalić.

Pasalic emphasized that vaccination of citizens is the fastest and easiest way to get out of the difficult epidemiological situation in which all citizens of the Republic of Serbia find themselves, both those infected with the Covid-19 virus and those suffering from other diseases, who cannot exercise their right to treatment due to the situation with the epidemic.

"The right to health is one of the basic human rights, and its violation for any reason entails the violation of other rights. Therefore, the competent authorities of the Republic of Serbia should undertake everything to ensure the guaranteed rights of citizens by creating conditions for the full realization of their right to health", said the Protector of Citizens.

Pasalic said that the pandemic has changed our lives and daily functioning and that is why he believes that vaccination is the best way out of this difficult situation in which the most important thing is to save the lives of citizens. 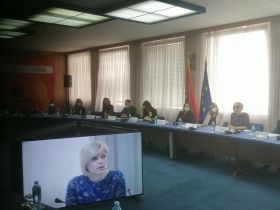